The ninth recipient of the annual DCAM Flight Instructor Safety Award for the year 2011 was:

“Aviation, safety & teaching are threads that have intertwined throughout my life and career; I am an educator at heart,” states our 2011 recipient who celebrates all the best in general aviation. Her long and distinguished career has resulted in having many honors bestowed upon her; including the Queen Elizabeth II Anniversary Medal for contributions to sport parachuting in Canada & being inducted into the Quebec Air & Space Hall of Fame.

A particularly impressive honor that she has received is the FAA having named an approach fix after her (“KFOXX,”) at Massena, New York, an unprecedented step in recognition of the FAA’S respect for her services at NAV Canada.

As a Board Member of the Transportation Safety Board of Canada, she passes on lessons learned from published investigation reports to her peers and students at Rockcliffe Flying Club, Ottawa, where she provides a safety leadership in her role of flight instructing. She is described by all as being someone who is not only a great teacher but remains a great student, striving to learn more. 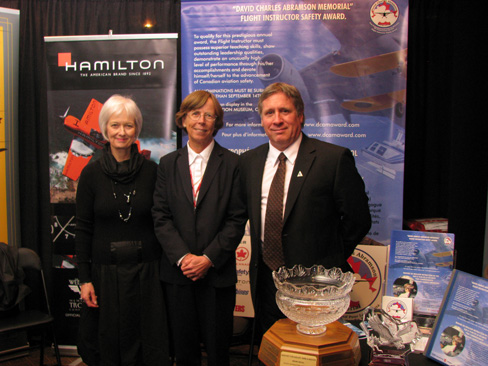