Transport Canada’s Director General of Civil Aviation Mr. Martin J. Eley had this to offer in support of the DCAM:
“The David Charles Abramson Memorial (DCAM) Flight Instructor Safety Award is a positive and significant testimony to the memory of David Charles Abramson and his achievements in aviation safety. This award represents a unique opportunity to recognize the important role flight training specialists play in making the business of flying safer. It is essential that we take the time to recognize exemplary flight instructors who demonstrate exceptional leadership in aviation safety and truly represent our industry’s cornerstone. My heart-felt congratulations go out to each of the recipients of the DCAM Award.”
Download our poster HERE

HISTORY OF THE DCAM AWARD 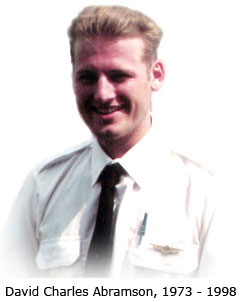 This trophy honours our son David, an accomplished individual in many areas of his life whose passion from a young age was to become a pilot.

David graduated from Montreal’s Beaconsfield High School in 1991 with a bilingual certificate, obtained a Commerce diploma from CGEP, and went on to become a pilot while studying economics at Concordia University. By the age of twenty-three David was a flight instructor, constantly upgrading an already impressive record of achievement.

He was a born teacher and made each student feel special. He enjoyed teaching as much as they enjoyed learning from his tremendous store of knowledge and skills. Always positive and goal-orientated, David shared a great sense of humour and gave greatly to others in life.

David’s life came to a tragic end on July 18th 1998 while on a routine training flight. He was just twenty-four. The Transportation Safety Board report concluded that,

“… improper maintenance procedures that released the aircraft for flight in an unsafe condition, a missing rudder-bar return spring, and a design anomaly in the rudder stop mechanism contributed to the accident.”

Through David’s heroic effort that day, his student survived. He was recognized by the Chief Instructor, Transportation Safety Board Investigators, Transport Canada Inspectors, his peers and students as a truly dedicated flight instructor. He passed on a passion for flying, demonstrated a natural skill for teaching, always kept safety at the forefront and ensured that every student enjoyed and looked forward to each flight.

Something positive has resulted from this accident. Notably, the Cessna modification to the rudder stops on 150/152 aircraft was made mandatory in Canada. There are approximately fifteen hundred aircraft of this type in Canada, and between twenty-five thousand to thirty-thousand worldwide.

“The Federal Aviation Administration (FAA) recently issued AD 2009-10-09R1, effective December 11, 2009, on the same issue.  It is clear to us that Mrs. Abramson’s efforts in the aftermath of this tragic accident have played a significant role in the safety actions taken by both Transport Canada and the FAA.”      —excerpt from TC’S Aviation Safety Letter 2/2010.