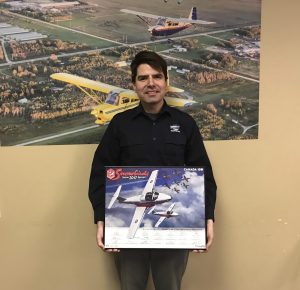 Have you ever watched a horror movie during which you were terrified by a sudden knock at your own front door?  That was exactly how I felt when the corner of my eye saw an unidentified object by my windshield shortly after takeoff. It was a crisp, fall day in northwestern Ontario, Canada. I was flying a Piper Navajo, single pilot, out of a remote First Nations community headed back home to St. Andrews (CYAV), Manitoba on a passenger-carrying charter flight.  I was in a right turn climbing about 500’ when something faintly caught my eye.  As I neared my desired heading, the vague flicker in my eye became clear: I was on a collision course with an enormous bald eagle.  Adrenaline kicked in.

Instantly, a barrage of YouTube bird-strike videos began looping through whichever part of the brain tells you that something horrible is about to happen. It was at that moment that I realized I had less than five seconds before the graceful, winged symbol of American freedom would become catastrophically fused into my wing. I increased the airplane’s bank angle and pitch rate in my climbing turn, now through about 1000’.  My escalated attempts became desperate to break our imminently converging paths. It was clear that if all things stayed equal, I was about to have a terrible day. Suddenly, my experience as an aerobatic pilot activated.  With eyes intensely locked on my feathered adversary, I consciously rolled and pulled the airplane into an eighty-degree banked turn, all the while carefully and safely managing G force, altitude, and angle of attack throughout the parabolic flight path.

“In aerobatics, there are no unusual attitudes”

Rolling a Navajo to such an extreme bank angle is far from a standard procedure. However, I felt that given my approximately 9000 hours of flying experience in over 50 types of airplanes (a large percentage of those hours spent flying inverted in purpose-built aerobatic machines), this was the safest and surest means of avoiding a collision. A collision with a bird that had roughly a 250 mph closure rate with me! And with that, I cleared the eagle, and returned the airplane to normal flight. Thus ended a terrifying situation which ultimately felt like, well…a non-event.

Looking behind my shoulder to check on my passengers, I was relieved to see them smiling with thumbs pointed up as if they had just ridden a roller coaster.  Feeling thankful that the encounter ended peacefully, I continued home with a slightly elevated heart rate and a feeling of gratitude. Grateful that during the early years of my flying life, my instructor, mentor and father purposefully removed the question mark. He made sure I confidently knew what happens to airplane and pilot while experiencing full-dimension flight throughout the complete flight envelope. In other words, he taught me aerobatics.

“In aerobatics, there are no unusual attitudes”.  This is a common adage that I have used to preface the many aerobatic courses I have taught over the years as a class 1 aerobatic instructor at Harv’s Air in Manitoba.  What I also go on to tell people is that not only will learning aerobatics make you a safer, more purposeful pilot, it is also a tremendous amount of fun.  Over the last twelve years I’ve had the distinguished privilege to have taught pilots of many different backgrounds. From PPL holders to seasoned airline captains and military pilots, I’ve been truly lucky to witness the joy someone feels after completing their first aileron roll or loop in a Citabria. They would then take it further with an inverted flat spin in a Pitts entirely on their own.  These pilots who stretch themselves outside of their comfort zones (whether they decide to pursue more aerobatics in the future or not), virtually always walk away from the experience as more confident, purposeful pilots. They can fully believe in themselves and in the machine.

This internal drive in me to share the value of aerobatic experience has lead me to a new chapter at Harv’s Air, the flight school at which I am the chief flight instructor of. Starting spring of 2018, we are proud to be the first Canadian flight school to offer dual training in the German-built, unlimited aerobatics capable Extra 300L.  As we did with the Pitts S2B that we operated at Harv’s Air for nearly 20 years, the Extra will serve as an exciting platform for our students to gain invaluable flying skills. All options will be available such as starter, confidence-boosting courses like Emergency Upset and Spin Training to Basic, Advanced and Competition aerobatics.  The Extra is arguably the world’s best certified two-place aerobatic trainer, and I can’t wait to share it with the pilots that we are honored to have walk through the doors of our schools.

American aviator Len Morgan said, “An airplane might disappoint any pilot, but it’ll never surprise a good one.”  I truly encourage every pilot to find an aerobatic instructor (you’re always welcome at Harv’s Air!), get out there, and fully explore the flight envelope. Remove the question mark and experience some of the most fun flying that there is to be had!