The recipient’s name is engraved on the prestigious trophy and entered in the associated logbook, both on permanent display in the Museum.

EACH YEAR, every nominee  receives  a personalized letter from the founder JANE ABRAMSON.

The DCAM introduced a ‘Legacy Award‘ in 2013. The Award is only provided when a deserving candidate has made it to the final selection process, and will not necessarily be given out each year.

The annual DCAM award has considerable advantages for each year’s recipient:

The winning candidate receives a crystal sculpture of an eagle to take home, and additions to the award are offered yearly by our sponsors, who this year are:

From Air Transport Association of Canada:

ATAC provides a venue at their Canadian Aviation Conference & Tradeshow for the founders, Jane and Rikki Abramson, to present the David Charles Abramson Memorial Flight Instructor Safety Award.  The instructor receiving the award is acknowledged in front of the industry and given national exposure. ATAC will also present a ‘certificate of recognition’ to the recipient.

Two nights hotel accommodation with a monetary contribution, total of $1,000.

From the Canadian Forces Snowbirds:

In recognition of the caliber of instructor nominated for the DCAM Flight Instructor Safety Award and experience they have to share, one seat in the (Transport Canada authorized) Seneca College Instructor Refresher Course will be awarded to a deserving nominee.

This is a three day course which includes informative presentations on current instructor trends, workshops, group discussions and simulator sessions in the Cessna 172, Beechcraft Bonanza, Baron and CRJ simulators at Seneca College.

Canada’s national aviation magazines are proud to recognize the recipient of the David Charles Abramson Memorial Flight Instructor Safety Award with national media coverage in print and online, personal gift subscriptions to WINGS Magazine and HELICOPTERS Magazine, as well as a 10-copy gift subscription for their flight school. 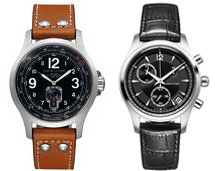 Hamilton are proud to be a Sponsor & Timekeeping Sponsor of the DCAM Flight Instructor Safety Award and are generously donating two Khaki Aviation watches to the recipient of the (DCAM) and for the DESERVING NOMINEE.

Hamilton was founded in 1892 in Lancaster, Pennsylvania, USA. Timing the skies since 1918 when the pilots of the first US airmail service between Washington and New York wore Hamilton watches Hamilton became the official watch of TWA, Eastern, United and Northwest Airlines, in the 1930s. Hamilton is now the official timekeeper of the Red Bull Air Race world championship, the new dimension of motorsports and taking the aviation watches to new heights.

Part of the Swatch Group, the largest watch manufacturer and distributor in the world, Hamilton proudly supports the Canadian Forces Snowbirds and is  also the proud Time-keeping sponsor of ATAC, the Air Cadet League of Canada & the Northern Lights Aero Foundation